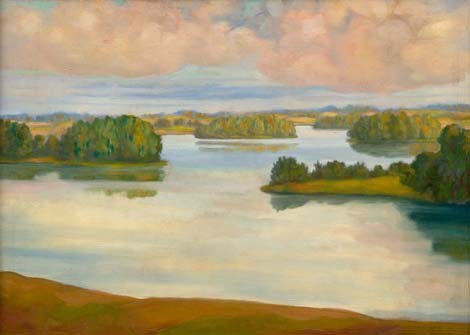 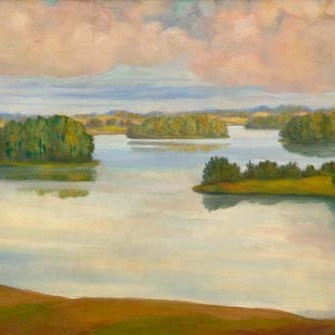 Voldemar Kangro-Pool, most probably one of the best-known students of Kristjan Raud, received a remarkably good international education, which was typical to the beginning of the century. In addition to Raud also the Ažbe School in Munich, thereafter already Paris, “Pallas” and also Hamburg. A diverse road was a sign of the artist’s restless character, which is also proved by some of his early works. The second half of the 1920ies witnesses the obvious calming down of Kangro-Pool. He settles permanently down in Tallinn and his already sufficiently well known in order to take up a life of a free-lance artist. Also his earlier restless futuristic themes are being replaced with close–to-nature landscapes. While comparing with his previous experiments, “Pühajärv” by Kangro-Pool is peaceful and thoughtful in an emphasized manner. He is not any more interested in the stormy skies and natural disasters, but the depicted visions: slightly pinkish clouds sliding over the landscape. Complete still-life and peace, which is reflected in the work, has also been rendered through quiet woods and reflections glowing from the lake.