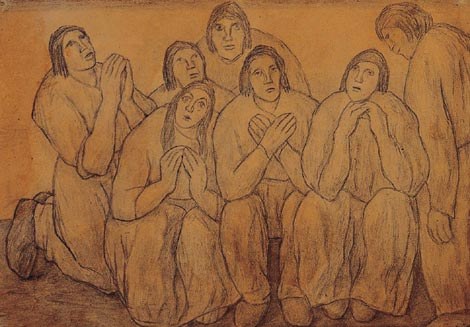 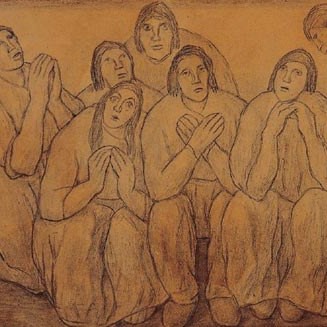 Several monographies and numerous articles have expressed the importance of Kristjan Raud as an artist, organizer of the artistic life and a teacher. Being in the first half of the century besides Konrad Mägi and Ants Laikmaa one of the most important artists, his works quickly changed from regular works into phenomena, possessing their own sphere of meaning. The most famous works of the creation of Raud are most probably the illustrations of the Kalevipoeg that summarized the moments, characteristic to the handwriting of the artist: national motifs, highly detailed, but at the same time extremely original manner of drawing and earnest and very absorbed approach to the topic that often carried a religious message. Hour of prayer has most probably been created in the years 1938 - 1942, when Raud made several drawings that depicted small mentally connected groups of people. The deep emphathic ability of the artist does not try to hide itself, the Hour of prayer renders with simple and laconic, but at the same time very exact lines an appeal to stick together and be together. This is not so much a prayer towards the God, but a prayer towards people.
The work is exposed in the catalogue part of the monography by Lehti Viiroja Kristjan Raud 1865-1943. Creation and expressions (Tallinn 1981) under no 1104 (page 202). The work was exposed at the Kristjan Raud commemoration exhibition in the Kadriorg castle in 1946 (catalogue no 803).