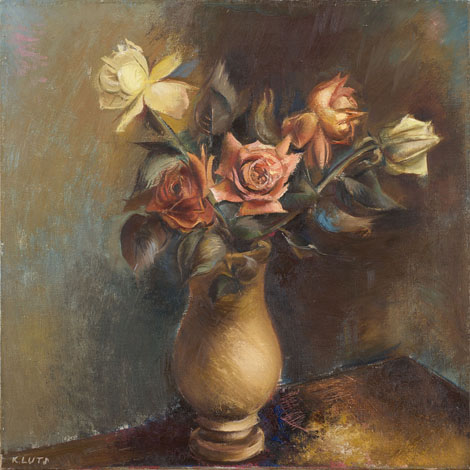 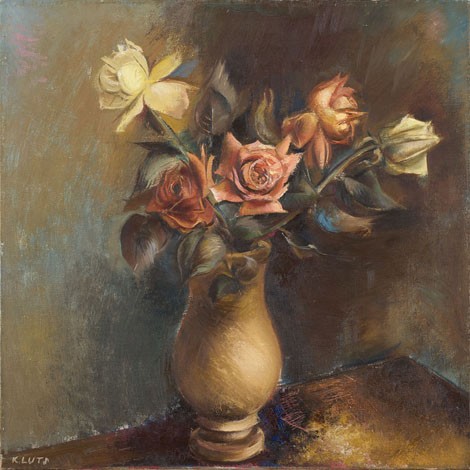 The pre-war creation of Karin Luts is highly valued because of two reasons: high artistic level and small number of the preserved works. Because of that they bear either such marking as “location unknown” or is shown some sort of a state museum. The total numbers from the period from 1925 to 1941 is only 61. Also this painting has been regarded missing and it has been marked, that when in 1929 Luts presented her new works, then by today “unfortunately no oil paintings and even not any photos of them have preserved” (M.Joonsalu). Even though in “Pallas” there were several female students, Luts was mostly the single one, who after the graduation continued to move along the chosen path. She also studied in Paris, collected impressions, but her talent type added a completely new creator to the Estonian art. “Roosid” is at the same time sensible and tender, while comparing with earlier still-lives has increased the amount of air, colour and light. Furthermore:” Still-lives became real painting exercises, where were played through new creative aspirations”. Luts was never satisfied with one or two solutions, the rose blossoms combine powerful colours and strong shadows, but the motif is light and aerial. This is the motif, which has been found, painted down, then lost and now found again.
The work has also been mentioned in the catalogue „Karin Luts. Konfliktid ja pihtimused” (Conflicts and confessions) (Tartu Art Museum 2005, page 220).