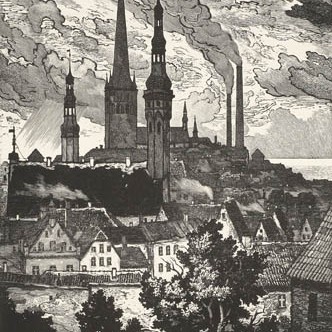 The creation of Leopold Ennosaar is not too much known. Therefore “Tallinna vaade” is a thrilling discovery of the graphical art of the 1950ies, where are joined the traditional cityscape and modern signs recognizing progress. Suddenly chimneys are next to the silhouettes of the towers of the old city, which in their turn additionally stress the aspiration into heights. Smoke, coming out of them, is mixed with clouds that forms an expressive and attention attracting complex. It would most probably be wrong to assume that such positioning was done with the aim to criticize the mindless incursion of industry – for that the author has too much been enchanted by the emerged sight.