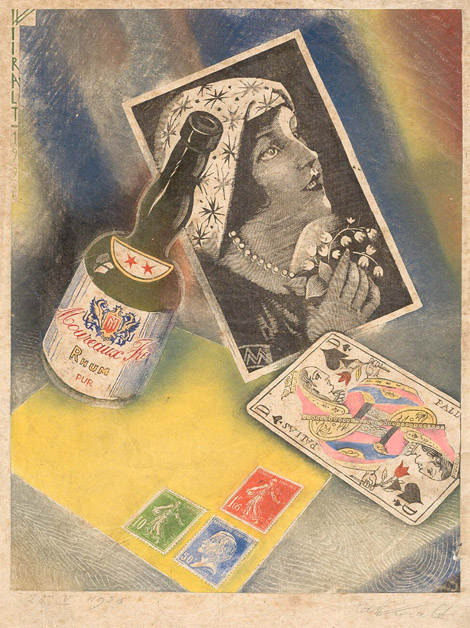 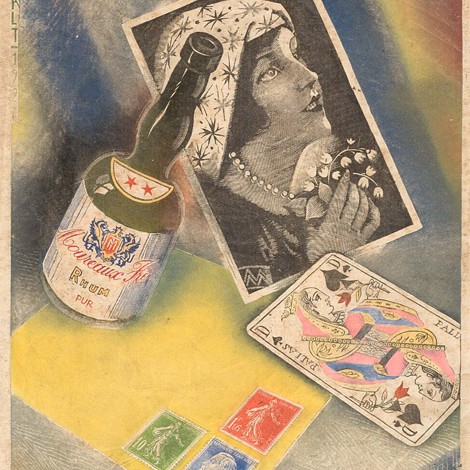 Eduard Wiiralt’s “Natüürmort” is a real discovery. We know Wiiralt’s early testing of wood engravings and also the role of “Natüürmort” among them, being one of the best-known and most widely reproduced sheet. Still, this coloured variant with a dedication is an art historian gem, to which it is really complicated to find something of equal value. The dedication on the sheet also proves the meaning of the work to Wiiralt, who presents the work to a wife of one gallerist. It is not impossible that the woman’s portrait in the picture has been made after this very woman.
“Natüürmort” has been accomplished in the wood engraving technique that is characteristic to the early period of Wiiralt and which he implemented much rarely in the later years. Differently from the earlier works, here Wiiralt’s line is quite wide and generalising. The choice of motifs covers several elements, which seem to be referring to the dark side of life and fatality: a bottle of alcohol, cards, portrait of a a woman. Here is both a goodbye to the Wiiralt of the first half of the 1920ies and a prophecy of his crazy fantasies. But differently from the familiar Wiiralt here has been turned down the limitation to black-white hues that is regarded characteristic to the graphical art – here has been added the colour. And this is already almost a painting.