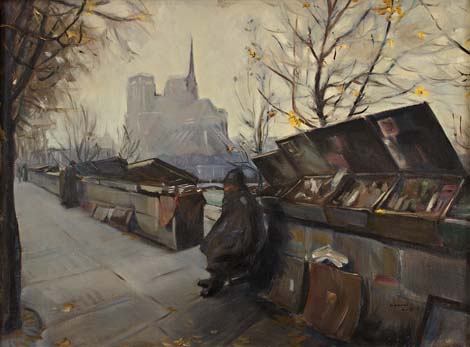 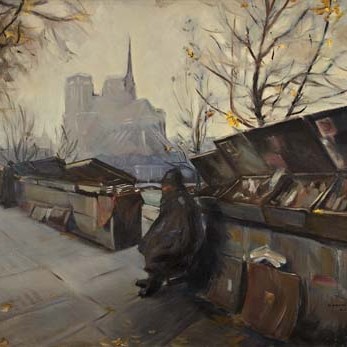 In the 1920ies and 1930ies leaving for Paris changed to a great extent the creation of Estonian artists and Andrus Johani was also not an exception. The thoroughly prepared trip did not last for years, but it was sufficient for being influenced by the fresh winds. Johani, having preferred to wander in the city during rainy weather and having depicted the local characters, became more mellow, adding to his works greater abundance of nuances. The artist, having depicted in Paris secondhand book – sellers for several times, tried different variants also in case of the current motif, but the present work is one of the most well-known ones of his whole creation. Here can simultaneously be found sadness of a suburb and loneliness of a metropolis, both reflection of the rain and dimming of the Notre Dame.
The work is being reproduced by a book, compiled by Helene Johani “Andrus Johani omas ajas 1906 - 1941” (”Andrus Johani in his own time 1906 - 1941” (Tallinn 1998, lk. 119).