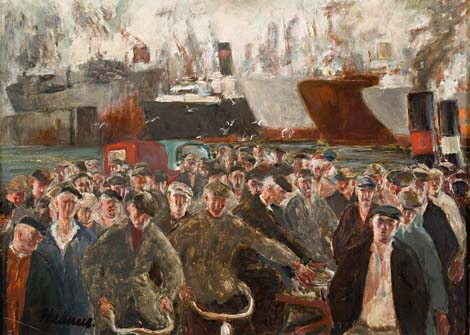 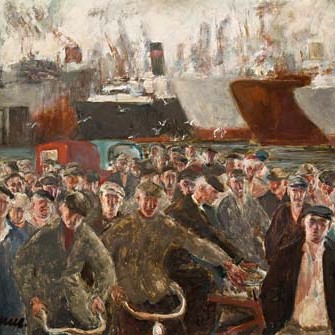 Eerik Haamer was known by his uncompromised attitude towards life. His contemporaries have told of his thoroughness both at creating and living. The present work is a brilliant example of the beforementioned. Haamer continues with his favourite theme: connection between people and life on the coast. When in Estonia he was watching fishermen in a more detailed manner, then in this case we have several lines of interpretation. One of them could take into consideration that only a few years prior to completing of the painting, Haamer together with many others was forced to leave Estonia by sea. And now we see a painting, where a number of men are waiting at the harbour, holding their bikes and at the background ships have already started their engines. And let’s also remember that Haamer often depicted men in cloth caps – often enough to think: wasn’t he really depicting himself?