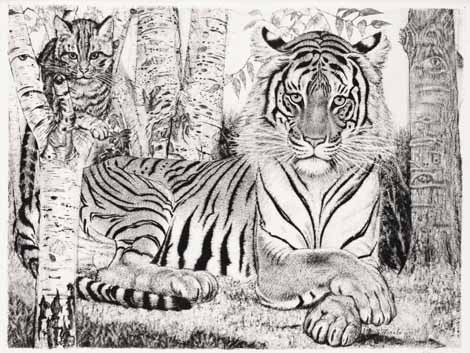 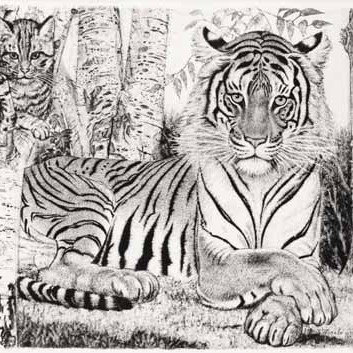 “Tiger with a cat” is an even more legendary development of Wiiralt’s legendary tiger motif. A cat in a tree and its expressive face looking at the viewer with interest is one of the best known and less seen works. Wiiralt returned in March 1950 to the “Lamav tiiger” (“Lying tiger”), having been accomplished in 1937, upon an order of a publishing house. Once it was a sheet, signifying Wiiralt’s calmer period and belonged together with different animal figures, in case of which Wiiralt preferred felines. This is most probably thanks to their expressiveness, but also their complicated positions. A tiger lying among birches is of course a slightly comical situation. A cat in a tree is in its turn is a humorous vignette, adding artistic charm, also mystery. Who would think of the cat from “Alice in Wonderland”? The tiger certainly would.