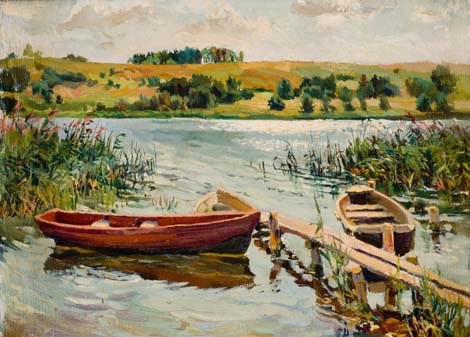 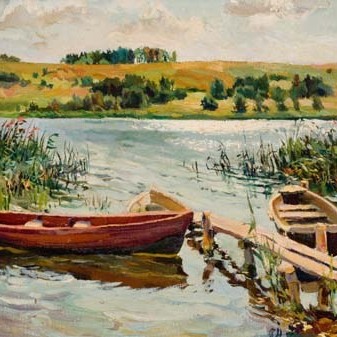 Oskar Raunam was most probably one of the last persons, who could study at Johannes Greenberg and this must have been an experience the meaning of which can hardly be overestimated. Even it is difficult to detect in the creation by Raunam the directly Greenberg-style line of painting, one could guess that certain ethical attitudes also reached him. The first half of the 1950ies was as known an extremely complicated period in the Estonian art life and Raunam, who worked a lot during his life as an educator, had just become a teacher of painting at the State Institute of Arts. Still he does not choose the theme of his painting to be anything obligatory, even vice versa. Raunam heads for the place where boats may float freely while being fastened to the pier without having any fishermen – heroes on them. He is not interested in obligatory themes or obligatory brush strikes. Differently from the canons of social realism, Raunam creates here only for himself: directly and honestly. Similarly with Murakin, Raunam first of all created the mood: boats, reflection of the light on the water, reed-bed, yellowish mountain slopes and a thin strip of sky show us the ability and desire of an artist to move to the places no one else can get.