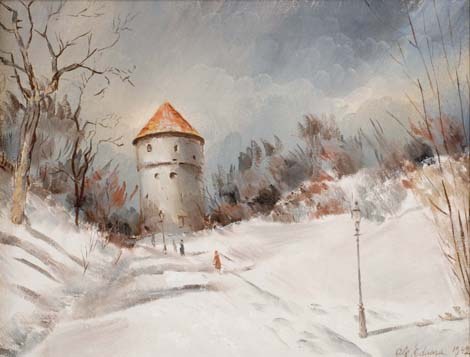 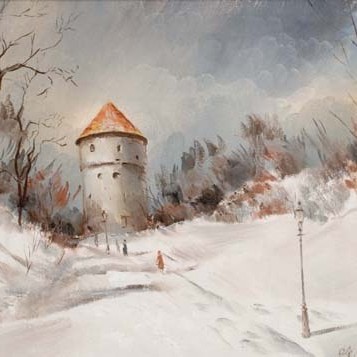 Eduard Ole is undoubtedly one of the most thrilling artistic personalities in the local art history. His way to education ignored the traditional standards, being limited with graduation from the Penza School of Arts at the age of 20. Most probably the courage to face the rules gave Ole a huge lead, when he became one of the leading experimenters of the 1920ies. Geometrical works, being carried by the spirit of cubism, are the first chapter in the local avant-garde and remained detached for decades. Still, Ole did not remain resting at what he had found, but kept on looking. Since the 1930ies he was one of the most outstanding local portrait painters, continuing to deal with this genre also while being in exile. At the same time it is known that Ole also worked at land- and cityscapes, being continuously on painting trips at the beginning of the 1940ies.
“Talvine Harjumägi” is most probably one of the last large-format works, which Ole accomplished while being in Estonia. The choice of motifs seems not to be done at random: it is the path, which leads from the Art Hall, which has been the home of so many artists, up to Toompea. Painters have also later painted the Kiek in de Kök tower, but have preferred as a rule colourful, spring or summer, which simplifies the task. Ole chose winter and this is a challenge. But his pliant brush, subtle changing of hues, exact catching of the crisp wintry mood and preserving of unexplained elegance at doing all of this are remarkable. If one still tries to choose a minor detail to start the analysis with, one could choose between the lamppost and its shadow on the snow. And then again.