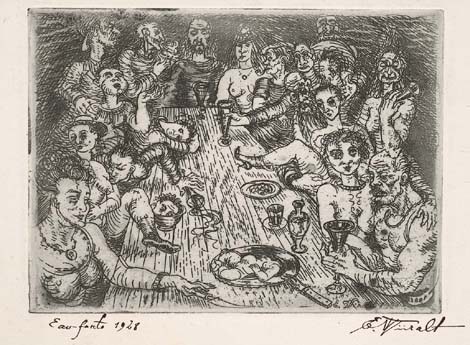 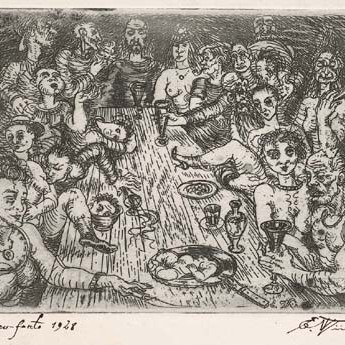 “Sööming” (“Orgy”) belongs clearly among Wiiralt’s visionary works, where he interpreted religious scenes through frenzied fantasy. In 1928 Wiiralt made his last book illustrations, but later renounced them, as he did not want to be limited by the author of the written text. From here on begins the most legendary series of works by Wiiralt, which is ended by “Põrgu” (“Hell”) and “Kabaree” (“Cabaret”). “Sööming” is according to the words of Mai Levin one of the predecessors of these works, but differently for example from “Põrgu”, the impression of the work is remarkably small. In one of his letter from February 21, 1938 he mentiones “Orgia” to the local biggest private collector Alfred Rõude, where he writes that together with the secont test proof of “Põrgu”, Jean Bloch also bought “Orgia”. The intimate format of the work is rare, but even on such a small area Wiiralt demonstrates his technical capability: abundance of details, brisky line, depiction of the space depth. But even of greater interest is still Wiiralt’s imagination, endless minor details and findings.