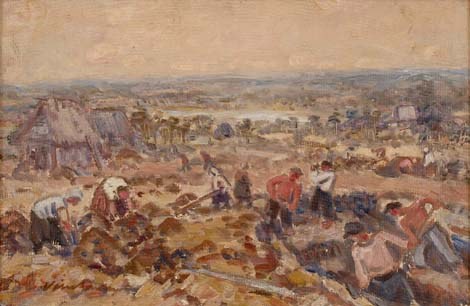 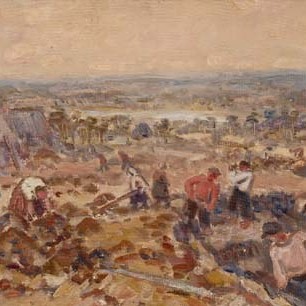 During decades, remaining between 1920ies and 1960ies, Võerahansu arose powerfully to the fore as a painter. Regarding his works were mentioned elaborate colours, but also extraordinary airyness, when sometimes the sky covered two thirds of the painting surface. And of course Võerahansu is referred to as an artist, who depicted a working man in a simple and everyday manner, despite the fact that officially were required over life - size workers’ fists and glances, directed to the distance. We could compare Võerahansu with Haamer - both are characterised by concentration on man, his day-to-day actions. Still, neither become a chatterbox at a café, growing in addition to the technical capability of their paintings also a significant symbolic meaning. When Haamer concentrated by using a profile at the observation of a passing person, then Võerahansu concentrated into his work a number of working figures. Here he has cancelled an elaborate depiction of each person, depicting eveyone with a couple of impetuous brush strikes. This way people in his paintings always melt together with the landscape, the nature. Their separation and pushing out of the surroundings would be painful and stupid.

The work is exposed under no 250 in the catalogue of the personal exhibition, which was held in 1958 in Tartu Museum of Arts.