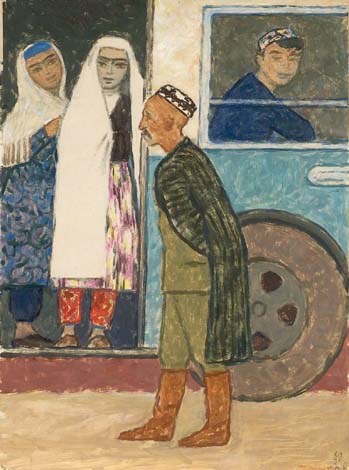 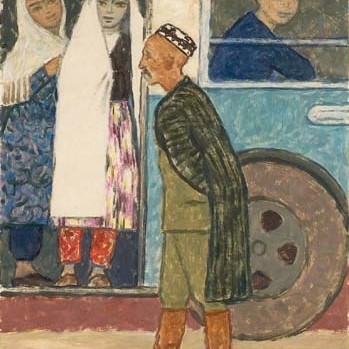 Ilmar Malin has by today been written down into the art history of Estonia first of all with three phenomena: as a fruitful art theorist, the most significant author of the local surrealism and with a little series, which was accomplished as a result of a trip in 1961 to the South-East Asia. This is a series, which has been evaluated as exceptional with the respect of Malin’s personal creative heritage, according to the general measurements as an innovative and discovering one. A roll of wall-paper under the arm and a few friends with him – this way Malin set off in the summer of 1961. Already before the journey the artist decided – he is not interested in postcard views, but people. “Reisijad” is one of the best known examples of such decision. “Exotic abundance of colours” has here been smoothly translated into “interesting oddness”, but even more than colours and forms, Malin is still interested in man. Also he has chosen an everyday situation, an overcrowded bus and people waiting to start moving, but has given up sweet idyll and has concentrated with a subtle humour on the direct character of the situation. This is not a work, where has been depicted a frozen and elaborated moment of life. This is a work, from which all stories just begin.