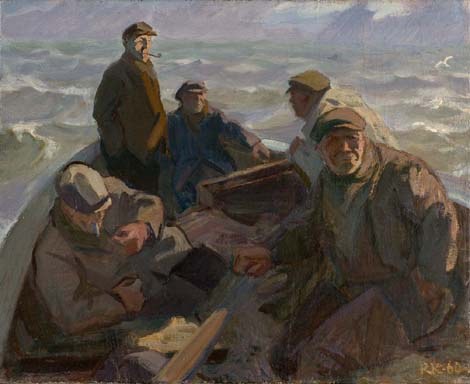 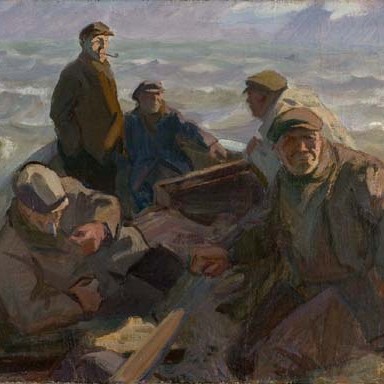 Creation of Raivo Korstnik has been very versatile. Well-known are his multi-coloured cityscapes, which have been influenced by pop-art. There are a number of small details, marching groups of people, regular city clamour on an ordinary weekday. Besides these works is also known Korstnik of the beginning of the 1960ies, the creation of his artistic peak. His favourite motif during that time becomes life on islands, especially that of fishermen. Korstnik goes with them fishing, sits in the prow and remembers everything. There is no sign of the future frivolity, Korstnik has an obvious respect towards the fishermen. The mood is still, vigorous men are sitting in the boat and watching the sea. As a creator of a figural composition, Korstnik forms an unexpected parallel with Eestik Haamer. The similar sincere respect and understanding, taking part in and being accepted into the life of coastal people. Similarly with “Eepos”, Korstnik leaves little room for decorative details, even though an early morning boat trip on the sea would offer an abundance of views. Korstnik has always watched only people. And that was also all that interested him on a boat trip in the year 1960.