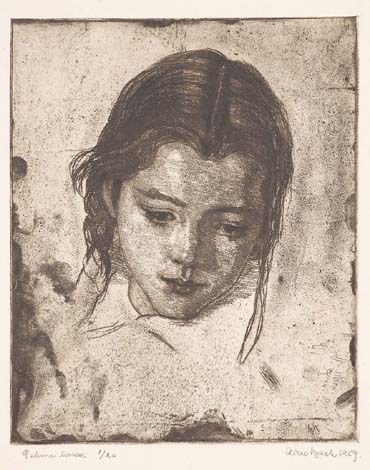 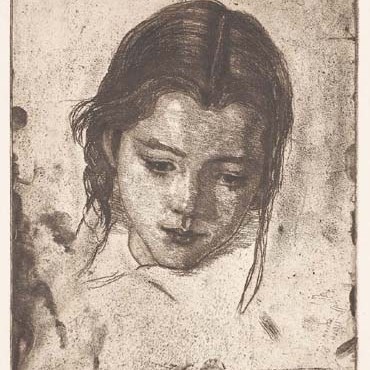 Aino Bach, most probably the most famous female Estonian graphical artist, took up her studies at “Pallas” as a painter, but she still turned into a graphical artist under the hand of Ado Vabbe. The creation of Bach, who graduated from the school in the year 1935, underwent a rapid development also at the end of the same decade and Bach became in a couple of years one of the most significant young authors. The 1940ies brought about the suppression of the whole local artistic scene, also Bach, whose adaptation with the emerged circumstances was quite painless, did not achieve her initial level until the 1950ies. According to the opinion of Lehti Viiroja (with which agree a number of people) the second half of the 1950ies can be regarded the second flourishing period of Bach’s creation.
“Leena” depicts a child, one of the favourite models of graphical artists, as her facial features and postures are provocative. This graphical sheet is preceded also by a drawing, which bears the same title, which clearly refers to the importance of the work for Bach, as the piece of art has been elaborated so carefully. Similarily with “Poiss”, also “Leena” becomes a symbol, it is not just a detailed depiction of a child. If “Poiss” gave a hunch of optimism and vitality of a slum-boy, then “Leena” is considerably more melancholic, serious, deeper. Differently from the creation of the 1930ies, when for Bach was of importance the abundance of details in the picture and detailed covering of a picture from one edge to another, “Leena” has been cleansed of any possible decorative noise. Here the artist has reached a certain clarity, she does not need additional attributes, but she is able to concentrate only on the essence of things. The figure in the middle of an empty sheet emphasizes in its turn the lowered head, careless locks of hair, a glance, which has been directed away from the viewer and meanings, which accompany them. And of course here is the proof number, the first successful proof, with which Bach was happy with.