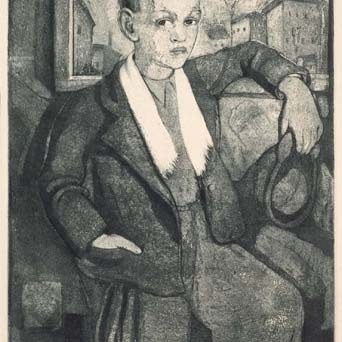 Aino Bach, most probably the most famous female Estonian graphical artist, took up her studies at “Pallas” as a painter, but she still turned into a graphical artist under the hand of Ado Vabbe. The creation of Bach, who graduated from the school in the year 1935, underwent a rapid development also at the end of the same decade and Bach became in a couple of years one of the most significant young authors. The 1940ies brought about the suppression of the whole local artistic scene, also Bach, whose adaptation with the emerged circumstances was quite painless, did not achieve her initial level until the 1950ies. According to the opinion of Lehti Viiroja (with which agree a number of people) the second half of the 1950ies can be regarded the second flourishing period of Bach’s creation.
At the present auction are being exposed two real gems of art history which are also the finest representatives of the whole creative heritage of Bach, but which from another hand are also grand landmarks of the art history of the whole 20. century. “Poiss”, which was made in 1938, is of course the most well-known work by Bach, her business card, where according to the general opinion the author has reached the ultimate top of her works. Bach works at “Poiss” in her favourite technique, the aquatint. In her manner of handling has not been emphasized the elaborate line (like it is in case of Wiiralt), but emphasized have rather been the surfaces.
The unnumbered proof gives evidence of one of the first author’s copies, with which Bach most probably had a deeply personal and emotional connection.
In addition to the perfect technical side we also detect the meaningfulness of the contents. Behind the boy’s head has been created “a picture in a picture” – a further view of an anonymous city. Presumably it is Paris, the city where Aino Bach met her model (and the model of the legendary painting of Karl Liigand). He was a paper-boy, an ordinary slum-boy, his becoming of a model could have been unthinkable during any other period. But these were his simplicity, directness, liveliness and natural looks, which lifted an ordinary paper-boy into the Estonian art classics.