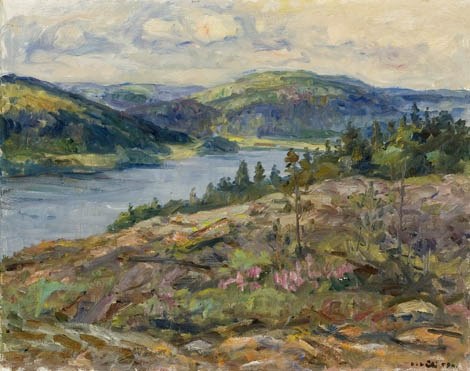 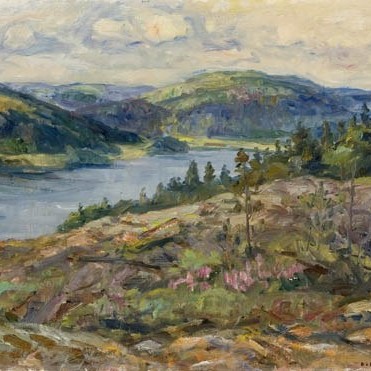 Purposefulness of Voldemar Väli at the arrival to art has been remarkable. Having had for years odd jobs as a wall-painter’s assistant and a stoker of a merchant ship, as a worker in a limestone quarry and a gardener’s helper, he was still able to become at the beginning of the 1930ies the studio student of several different masters. After the studies at Nyman, Kaigorodov, Bergholtz and others, Väli headed at the end of the 1930ies to “Pallas” to study at Ado Vabbe. Only a decade later Väli himself already became a long-term lecturer and painting professor, working simultaneously also as an active artist.
“Sortavala maastik” belongs to a well-known and highly valued creative period. In the second half of the summer of the year 1959, Väli went to Karelia and the series of landscapes painted there has been evaluated as reaching of the new level. Villem Raam, being most probably the best specialist on the creation of Väli, has written, how in the Sortavala-series has been achieved the “generalising thought” and how the “spontaneous freedom of brush and colour handling reaches here in places the limit, exceeding of which almost seems impossible”. The artist never descends into the numb realism, which even during the mid-1950ies was an official standard. At the same time Väli keeps clear distance with exaggeration, remaining always in the area where “every colour spot and brush strike is directly and lively connected with nature, has directly been derived from nature itself”.

The work was exposed at Voldemar Väli’s personal exhibition in the year 1959.