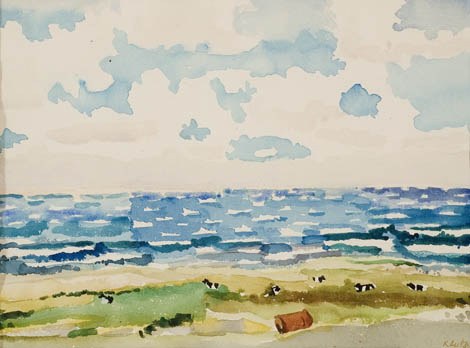 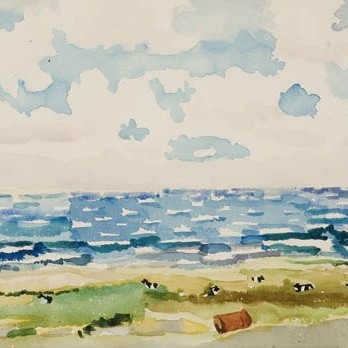 Karin Luts is undoubtedly one of the most prominent Estonian female artists throughout ages. Luts, having graduated from “Pallas” as the student of Konrad Mägi and Ado Vabbe, was able to continue her studies in Paris and Rome, received the almost best possible education. The extremely original artist, having entered forcefully the Estonian artistic picture in the 1920ies, found even wider recognition in the following decade.The local career of Luts, who had painted herself here in a short time the classics of Estonia, was sharply cut through by the forced flight for Sweden in the year 1944. Little information of the creation in exile could still convince that the skilfulness of Luts had found new challenges.
“Meri”, having been accomplished only five years after the flight, shows expressively the continuation of the artist’s creative peak. On the work, at the first glance of laconic colour and brush handling, start playing not just skilful colour spots, but skilfully left blanks. Here Luts has given up over-exaggerated colour fracas and has created with few, but extremely accurately chosen positionings both the powerful sky and strange animal-pattern vignettes in the foreground. So it happens, when the artist has equal command of colours and the space behind the colours.