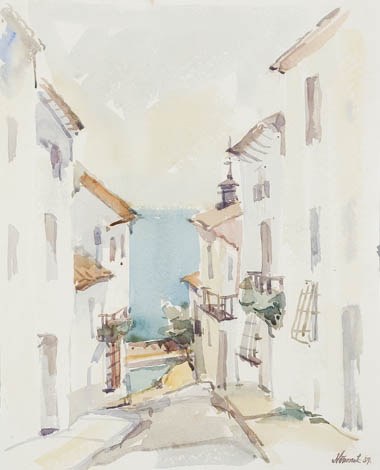 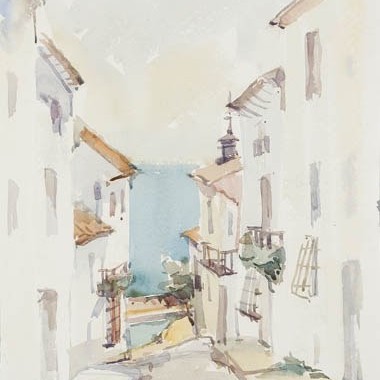 Juhan Nõmmik went to “Pallas” already at the age of 18 and after graduating from the school in the year 1929 he quickly became the lecturer of the same school. For a short time Nõmmik was even the director of “Pallas”, which had by then already changed its name, but the forced flight for Sweden finished his local career. Still – similarily to Endel Kõks or Eduard Wiiralt – Nõmmik actively continued dealing with creation. When the “pre-war” Nõmmik was first of all a realistic painter of the Estonian landscapes, then from the works of the following decades are unanimously emphasized the lively and gentle landscapes, which were painted after the trip to Spain in 1959.
Altea, one of the brightest cities of Costa Blanca on the eastern coast of Spain, is naturally charming in several different ways. Nõmmik has picked from these ways the most picturesque and the most complicated one. Architecture becomes his pretext at choosing of the slightly mysterious milieu motif, “the beautiful sunny weather” creates Nõmmik the basis for handling of the strangely floating light, which absorbes in itself all shadows, the exotic nature is in Nõmmik’s eyes first of all the possibility of examining extraordinary colours. When Eerik Haamer discovered in the same year for his paintings first of all everyday motifs and decorative forms, then Nõmmik sees the atmosphere, the hardly grasped “it”, which Spain consists of and what Spain means.