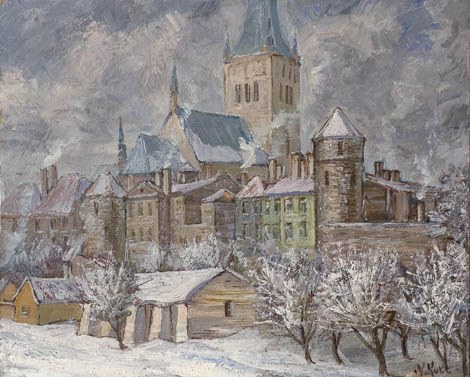 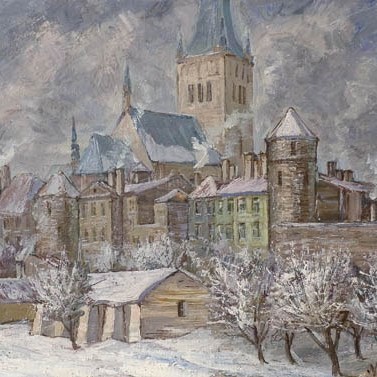 Nikolai Kull can be called without doubts a grand master of Tallinn old city scapes. The basic texture of his creation remained unchanged for years, only gradually confirming the found values. As a student of Laikmaa and Triik and as an artist, having been to study trips in Helsinki and Germany, Kull never became the follower of any distinctly determined artistic flow. In his creation were always present two at the first sight contradictory wishes: the desire for a true-to-life manner of painting and the wish to ruin the absolute true-to-life depiction by the artist’s intervention.
“Linnavaade” (“A view of the city”) belongs to the well-known series of cityscapes, having been painted by Kull in the second half of the 1930ies, which has formed a separate chapter in art history. Also here has Kull used one of his favourite view angles at the old city, which covers the St.Olev’s church and the belt of towers. But in addition to the ordinary “tourist” view, Kull is also interested in another side of the old city: he cuts St.Olev’s into halves and concentrates to a greater extent at observing of the down-town. Slightly romantic little houses, trees growing in front of and between them and a street leading between these houses is something that enchants Kull most of all. Let us also add here a congealed wintry atmosphere and roofs covered with snow and we get a cityscape, where decorative aspects have been replaced by nostalgia, instead of indulging of beautiful fancies there is a real spirited atmosphere.