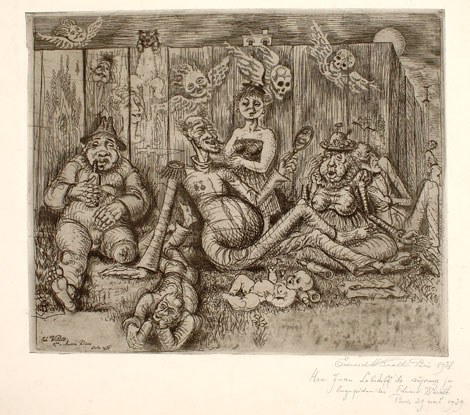 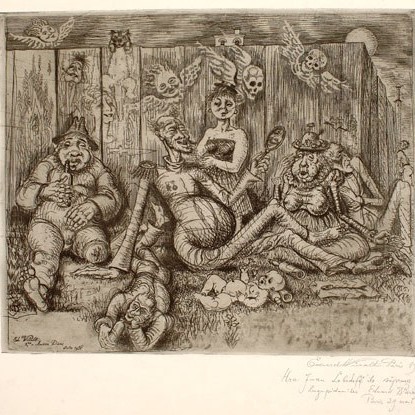 Talking of Eduard Wiiralt has become in spite of apparent lightness a complicated issue. We know of him enough in order to ask where to start from: either from Wiiralt’s international name, his connections with well-known authors, of exhibitions in important galleries and orders from publishing houses? Or while talking of Wiiralt in the context of the local cultural history, to try to grasp helplessly the meaning of the artist “Wiiralt”? “Seltskond” undoubtedly justifies both of these approaches. Here we can detect contact with big city life and world art, but we can also speak about sticking of Wiiralt visibly out of the Estonian art of that period. There is also the third possibility: to have a look at “Seltskond” having as background Wiiralt himself and to notice, how the work has been accomplished during the artist’s most thrilling, grotesque, frantic and shiny creative period. To notice, how from among the top works of the author, which were made in Paris, it is “Seltskond”, which shows the “shift in the fantastic-grotesque style of the artist” (Mai Levin). How severe sarcasm enters the work and how “this work lets us have a clearer inkling than ever before of the artist’s misantropic world vision of the period”. The build-up of the sheet is at the first glance logical, the scene justified, but fantastic elements and grotesque, having been boosted to the extreme, reflect clearly Wiiralt’s powerful approach, his unstoppable imaginagtion. This is joined by an admirable technical perfectness and the skill to gather onto one sheet hideous vices and sharp irony, brutality and sins of the world.