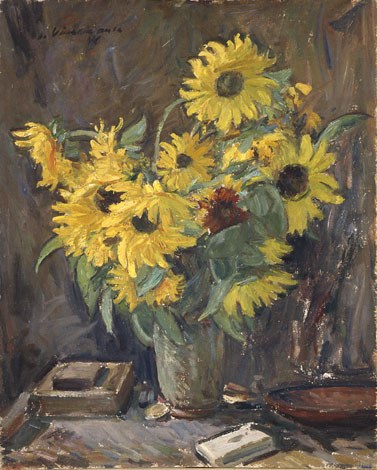 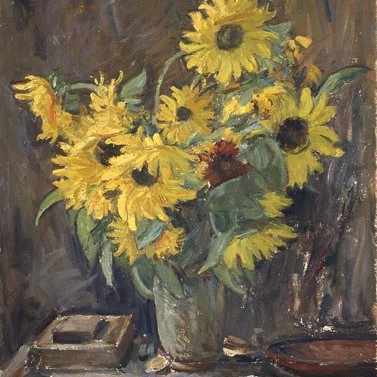 Johannes Võerahansu’s arrival at art was most probably inevitable. Already as a teenager, he received the first according knowledge at Ants Laikmaa in the studio school of the latter, but this was followed by a forced pause, which lasted for more than ten years. Only in the year 1932 Võerahansu received again a chance to dive into art through “Pallas”. Already then he rose to the fore as an outstanding author, becoming after WW II one of the painting teaching leaders, who formed whole generations of young artists.
“Päevalilled”, having been painted just after the war, make us again wonder, how the local authors were during the most problematic times able to turn to themes and painting techniques, which as the replacement of the surrounding horror were able to offer completely different subjects. Võerahansu, whose “sensitivity at depicting flowers” has been noticed repeatedly, concentrates here on sunflowers and the artist’s work-table. First of all he has paid attention to the compositional values of the painting, setting the flowers in the vase and items on the table so that the formed integer would allow to deal without stoppage with colour-related problems. Items, having seemingly accidentally ended up on the table, find a justification of the subtle sense of colours of Võerahansu, adding to big and slightly melancholic sunflowers also the brick red of the bowl and impetuous brown of the books.