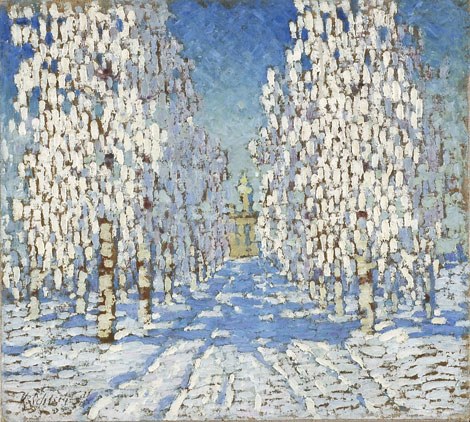 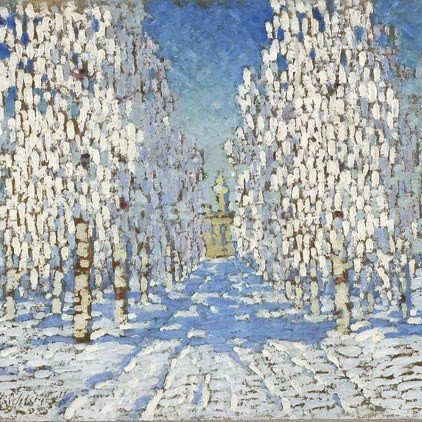 In case of Konstantin Süvalo we can be quite sure of what has been of the greatest influence of his creation. Being aware of his studies in the St.Petersburg Academy of Arts in the Kardovski studio and in the Blum School of Arts in Riga, we still end up at Vilhelms Purvi^tis. Since the year 1909 Süvalo studied in the Riga School of Arts under the supervision of the grand master of the local impressionistic style of painting, emerging in the Estonian art history with another student of Purvi^tis, Villem Ormisson.
“Talvemaastik” is a work, which could be a textbook example of both impressionism and the creation of Konstantin Süvalo. A rare example of the author’s early workstyle has based its structure on a solid ground: basis of the composition is a birch avenue, diving into the room, at the end of which is a spectacular yellowish building. The way, heading towards the depth of the picture, absorbes into itself the shadows of winter trees (Süvalo’s depiction of light here is unique), birch branches, which have been depicted with an extremely specific brush work, frame the glance which is being allured into the core of the painting. Then follows the sky, the depiction of which has been carefully thought through, where blue once becomes paler, once darkens. And naturally: with enchanting use of colours and light, Süvalo brings forward the most subtle basting threads of winter, the most well-concealed flows.