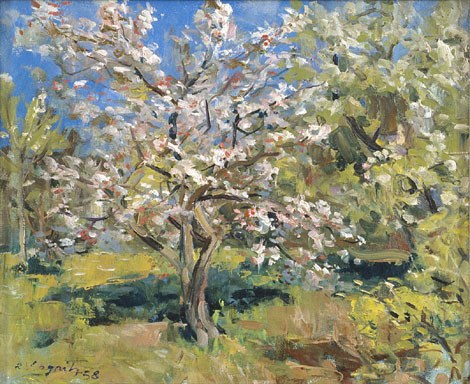 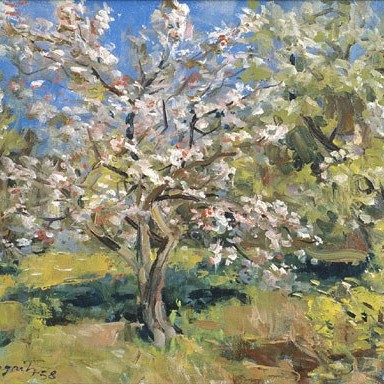 The educational way of Richard Sagrits co-incides to a considerable extent with that of Evald Okas, but especially with that of Agu Pihelga, in the same year with whom he took up the studies of decorative painting in the State Artistic Vocational School at Roman Nyman. But already two years later Sagrits went to study in “Pallas”, where he parallelly continued the studies of painting and graphical art accordingly at Nikolai Triik and Ado Vabbe. It has been claimed that it is the colour culture that is of the greatest importance that he received from his studies in “Pallas”.
“Õunapuu” belongs to these well-known Sagrits works, having been accomplished in mid-1950ies, where he to the counterbalance of the grand and half-oredered works, which were the painted landscapes of the Crimea and Karelia, dedicated himself to intimate glances of the Estonian nature. These are small, deeply honest and politically innocent landscapes, where Sagrits was able to use fully his painting skills. If ususally the local landscape painters have preferred to work in summer, then the spring landscape of Sagrits shows skilfully the strong light and deep shadows, characteristic to that season. The appletree blossoms give the reason to work with white and pink and green, emerging from te grass and trees is not tarnished and worn out as in summer, but especially fresh and bright.