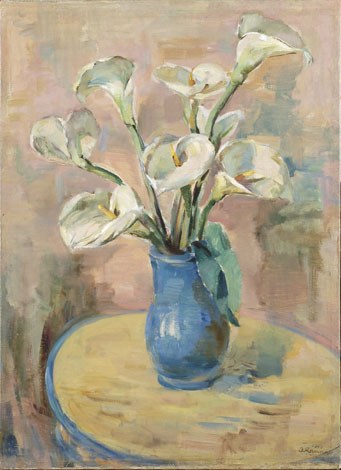 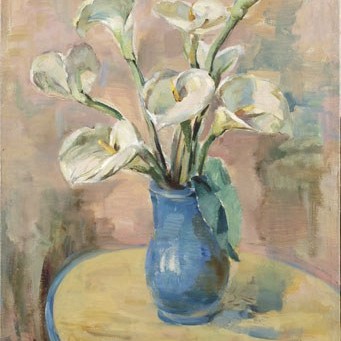 Oskar Raunam attended the State Artistic Vocational School, but of greater importance seem his studies, having commenced at the end of the 1930ies under the hand of Johannes Greenberg in the State Higher School of Arts. “Kallad” has been made during that period, concentrating on the favourite motif of Raunam. Raunam, who became a professor of painting and worked while possessing the mentioned title for a long time, was already exceptionally courageous at introducing unconventional colours in the year 1940. He is not interested in either finding of sharp contradictions or creating of a mild melting pot, but rather testing of unexpected combinations. Here the main emphasis is laid obviously on aurums, at the depiction of which Raunam has not held back his fantasy. Instead of using the revelling and simple white, the artist has had a much more thrilling approach to the motif. White on his palette has several side- and subshades, being once the result of mixing of the colour with green, once with subtle brown. Also in the background the author has used the more difficult way and has mixed together pink and blue, brownish and greenish, on the table seek adventures together yellow and dark yellow and even the shadow, falling from the vase is multi-coloured. Such diversity can also be detected in forms, where a round table has been fitted together with straight flower stems. Here the classical still-life has taken totally new turns, framing exactly its extraordinary beauty.