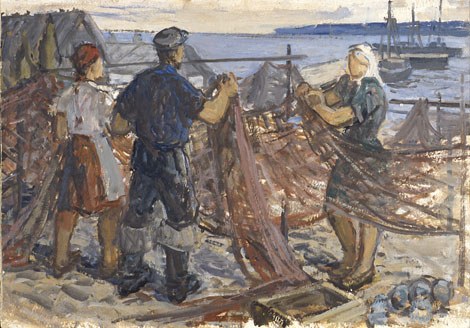 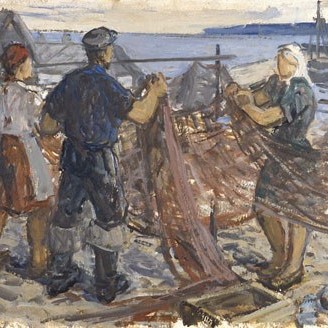 Agu Pihelga could be placed next to Evald Okase because of several reasons. They both studied at least for a while parallelly decorative painting in the State Artistic Vocational School and the lecturer of both of them was August Jansen, even though in Pihalga case should also be noticed the influences of Roman Nyman. Pihelga, having graduated from the school in already 1934, continued his studies, but instead of choosing St.Petersburg or Germany according to the model of the beginning of the century, he headed for Finland, creating this way a new creative centre in the Estonian art history. In the school of the Finnish Art Society Pihelga studied for three years and after returning he also became a long-term and higly valued lecturer in the ESAI.
“Võrkude kuivamapanek” gives its own interpretation to the theme of “Vana kalur” by Okas, but the approach of Pihelga is totally different: to the grandiosity he prefers more scanty means, to the portrait he prefers a scene with several people in action, to an exact painting manner a more free stylistic approach. Pihelga, having conducted thorough researches of the local water-colour history, interprets a water-colour into a context of a painting, taking over the briskness of colours and certain liberty at depicting of the motif. Here we can not detect excessive pathos, art is for Pihelga a possibility to make a gallant, but a discreet and honest gesture to the coastal people.