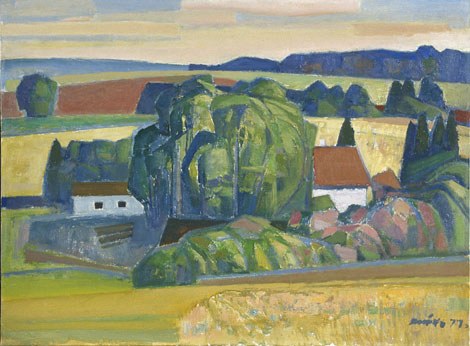 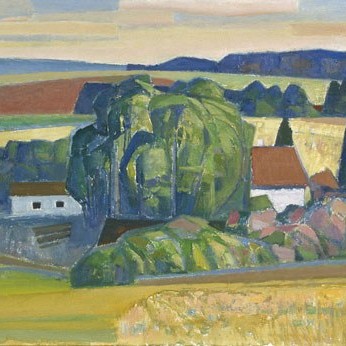 Approach to Lepo Mikko and his creation can be and has been from under extremely different angles. There have been aspirations to capture the models of those, having influenced him during his school-time: there have been attempts to find in Mikko’s works the footprints of Nikolai Triik from “Pallas” and lecturers August Jansen and Roman Nyman of the State Artistic Vocational School. Mikko’s work has been compared with the work of his two best friends, Elmar Kits and Endel Kõks, but the results have not been too good here either. The legendary lecturer, who was for quite a long period considered to be the only one, who was able to remain honest and ethical in his creation also during the most problematic times, was able to cover with his paintings so many different issues that all sorts of comparisons would just be foolish.
“Suvine maastik” reflects one of the most important Mikko’s directions, which is clearly depicted through stylizing of forms, colour poetry and cordiality of the motif. End of the 1970ies saw one of the artistic peaks of the artist (Kristjan Raud prize in the year 1976), which is also connected with “Suvine maastik”. Still, here are added certain additional qualities, where form experimenting and free painting style are supplemented by a strangely warm light and crystal-sound colours. High horizon and scanty sky leave room for a fatigued landscape, which is simultaneously melancholic and happy.