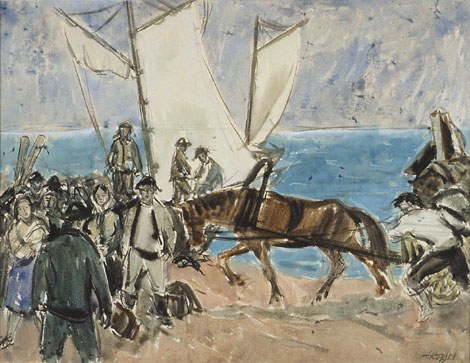 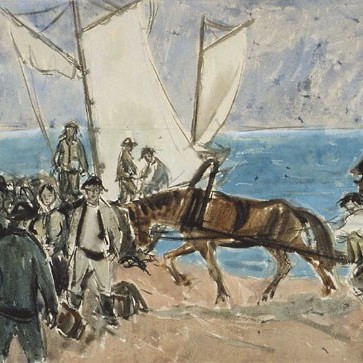 While talking of the creation of Endel Kõks, people have often wondered, what would have happened with one of the most talented Estonian artist of all times under the conditions of stupid art-related regulations of the 1950ies? Would Kõks, who directly before the turns of history graduated from “Pallas” as the student of Ado Vabbe, but had by then already made himself famous at exhibitions, have been able to adapt or work in the internal exile? Extremely sensitive sense of colour, sophisticated taste and the creation of subtle artistic worlds, reflected in his paintings, allows us to presuppose that the artistic repressions would have had the strongest impact on Kõks. Only the forced leave enabled him to continue with his extremely elaborated works.
As Kõks remained himself while standing for the artistic ideals is also obvious in “Rannas”. Kõks, who had arrived to stay in Sweden only a year ago, continues here with a slightly diffused figure depiction, which leaves a deceitfully sketchy impression. The basis, being a free drawing, has been melted in “Rannas” into mild colours. Social-realistic nagging on petty details, having prevailed in the Estonian artistic life at that period, has no place in the creation of Kõks: he is impetuous, pushing freedom, which is characteristic to water-colours to its fastest limits and inquiring mutual influence spheres of coloured surfaces. Indeed, “avant-garde artists do not deal with abstract problems anymore, but try to look behind the abstract art,” as Kõks put it in the year 1951.