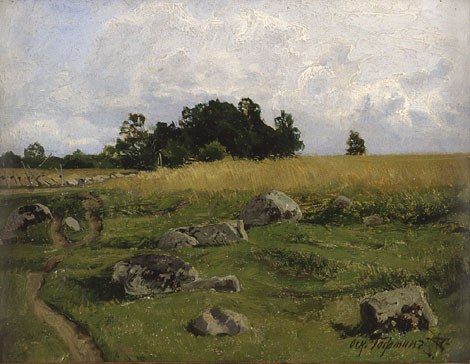 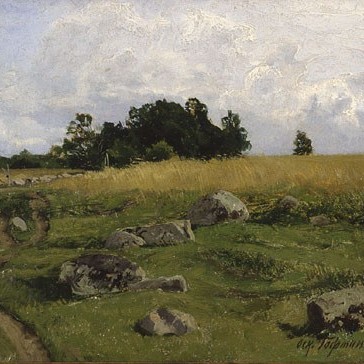 Oskar Hoffmann could be compared with Eduard Gebhardt because of his artist’s fate and also his importance. Also Hoffmann was born in Estonia, in Tartu as a son of an ordinary baker, but having hardly celebrated his 21. birthday, he also went abroad to study. In the Düsseldorf Academy of Arts Gebhardt became the most important teacher of the artist, later was of importance also Eugen Dücker, with whom was formed the legenday “Düsseldorf school”. They were the artists, whose creation acquired international dimensions and whose quite similar painting style became a certain high-quality trade mark. In the artist’s titles most probably is the most important one the status of the honourable member of the Imperial Academy of Arts of St.Petersburg, but of equal importance could be considered his extraordinary popularity among art lovers of St.Petersburg and Estonian art scientists, who have named Hoffman among other titles “the Estonian Rembrandt”.
Onto the work “Hilissuvine maastik” Hoffmann has not brought any humans. Instead of epic enforcement he prefers an intimate and personal style. In his landscape Hoffmann is amazingly free and picturesque, capturing at the same time the ripe mood, typical to late summer and subtle shade differences of stones and a corn field. A slightly slanted fence, a winding footpath and invisible wind are certain evidence that the artist does not watch the landscape with a glance of a by-stander, but dives “with an in-born sense of colours” (Anne Lõugas) into the different layers of the motif. We can be sure. Hoffmann himself is here.