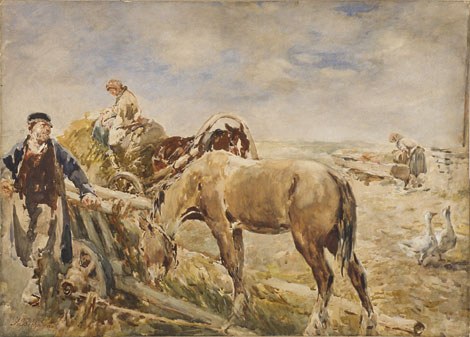 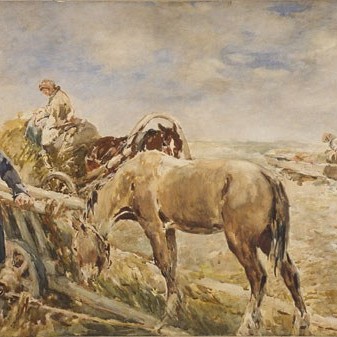 Gregor Bochmann, who has been called by German art scientists “a Master of old art, who does not depend on fashion trends”, was born in the Nehatu manor. He left Estonia already at the age of 18 in order to commence studies in a prestigeous Düsseldorf Art Academy and already three years later he founded in the same city his own studio. The following decades witnessed the continuously increasing fame of Bochmann, the result of which was the academician’s title from the Berlin Academy of Arts and nominating him a professor by the Düsseldorf home academy. In the artistic twists during the turn of the century and being in the centre of the German art, Bochmann always remained true to himself, mediating through brilliant works, which were technically excellent, first of all memories and childhood impressions from the homeland.
“Lahtirakendatud hobune” reflects from one side the author’s exceprionally skilful academical possession of colour, brush and composition, from the other hand the nostalgic scene reflects openly Bochmann’s attachment towards the local people and situations. Exactly such kind of works have been acquired into their collections by museums, because where else would be reflected better love of an internationally significant artist towards Estonia. His favourite motif – horses in front of a smithy – is used by the author as a pretext for demonstrating his ability to leave aside unneccessary pecking at details. In the water-colours he wants to capture the core of everything – one mood, one feeling, one moment.