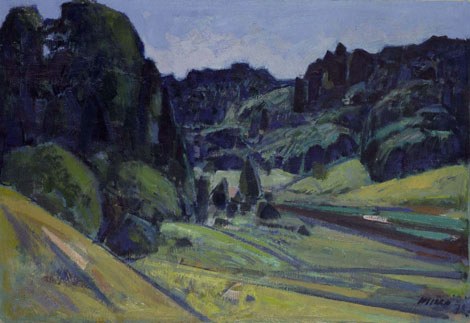 A lot has been talked about Lepo Mikko, who together with Elmar Kits and Endel Kõks formed “The golden triplet of Tartu”, but these stories are not sufficient. Mikko, who graduated from “Pallas” as mainly the student of Nikolai Triik, started to work himself as a lecturer after World War II, acquiring similarily with Johannes Võerahansu the professor title.
Of Mikko is mainly talked because of justified reasons in connection with form analysis – of works, which the artist has visibly dismembered and re-formed so that onto the surface of the painting appear instead of copying of the reality rhythms and different stylised forms which start to comment on each other carefully. As an excellent painter, Mikko was able to supplement the formed form rhythms with a subtle choice of colours, painting even the traditional green into multiple shades. By the way, the Karksi primeval valley is for Mikko not just a flirt with a popular sight, but a sincere and personal return home – Mikko’s birthplace is located in the immediate neighbourhood of the primeval valley.