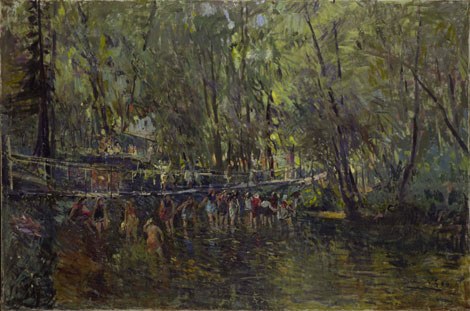 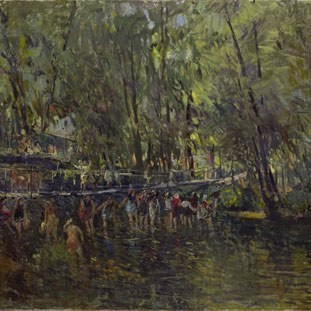 Elmar Kits became after graduating from “Pallas” quickly a lecturer of the same school and as an especially talented artist one of the most outstanding creators of Estonia. His constantly experimenting manner of painting was able to move in an equally light manner both in the trails of impressionism and cubism, but it was the first half of the 1960ies that was regarded to be the period, when “Kits stepped firmly on his own road” (Tiiu Talvistu).
One of the most legendary works of Elmar Kits was his “Kevad” from the year 1961, that is now stored in the collection of the Estonian Art Museum. The current work has until now been concealed from the public, but we are dealing with a large-size, early work. “Kevad”, having been painted in 1960, can be called a specific powerful predecessor of one of the best works by Kits, using the same motif. Elmar Kits has also in this case proceeded from impressionist colouring, being able to create an extremely spacious atmosphere. Elaboration of the composition and mixing of different colour shades into a powerful integer allow us to classify “Kevad” among other best-known works of Kits.