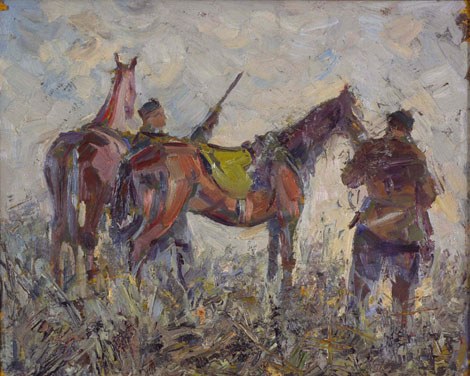 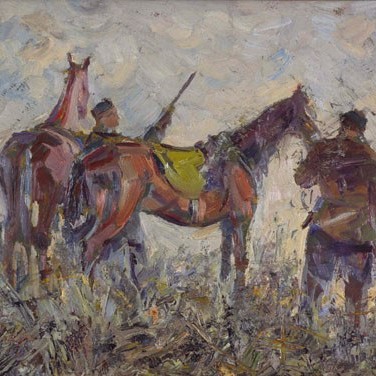 Ado Vabbe has repeatedly been called the most important Estonian artist of the 20.century whom it is still most complicated to classify. The title “the first really modern artist” (Evi Pihlak) is exact, but what can be classified under such notion? Continuous new experiments that in case of Vabbe never remained careful steps, but were elaborated to perfection, allow us to call Vabbe an experimenter. The extremely impulsive style and especially sensitive artist’s nerve was balanced by “mysterious silence, enigma and deep absorbing into himself”. It really seems that Vabbe could be easily be compared with one of the most important authors of the worldwide art culture of the 20.century, Vassili Kandinsky, whom young Vabbe met at the end of the 19th century in Narva. Like Kandinsky, also Vabbe went to study in Munich for a couple of years and later headed for Italy, to get acquainted with the local art life. Being one of the founders of “Pallas” and most probably one of the most influential lecturer of the mentioned school through ages, Vabbe was also able to work continuously with himself and search new ways.
The painting “Mehed ja hobused” can be compared with the creation of Vabbe from the beginning of the 1940ies that has preserved in very small numbers. During the mentioned period Vabbe painted his works mostly on paper that was on one hand caused by the war-time difficulties to find canvas, from another hand the artist’s improvisational character. At the same time is marked that only in these works Vabbe starts to show gradually increasing interest towards such purely painting-related values as composition of colours and brush technique. In the work “Mehed ja hobused” is also reflected the general study-style of countenance of the artist. In this work the author deals at the same time with the creation of a figural composition and reasearch of colour harmony, finishing both of these roads in a typical Ado Vabbe-manner.