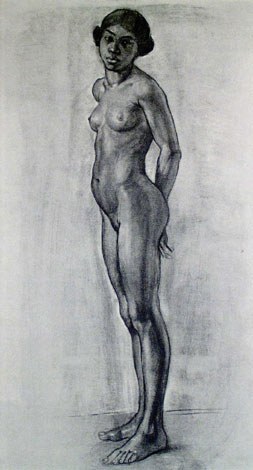 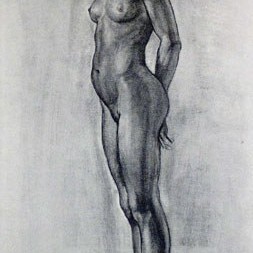 While describing the studies of Johannes Greenberg in Munich during the period 1908- 13, the author of the monography of the artist, Hilja Läti, has noted his progress in nude drawing and figural composition in the local Academy of Arts under the supervision of Gabriel von Hackl. It seems that into the mentioned period could be dated a large nude drawing that already gives an inkling of the sense of form of the future good artist, despite the general characters of the age and education. In the beginning of the century were highly appreciated nude paintings with a clear contour, silhouette influence and form plastic that was often monumentalized into a separate piece of art. One of the best-known “promotion” of such nude drawings is Valentin Serov’s “Baleriin Ida Rubinsteini portree” (“Portrait of ballerina Ida Rubinstein”), 1910. Drawing of young Greenberg of a mulatto woman is sufficiently skilful, expressive and elaborated to be taken as an independent work. From this takes the development line to the nude paintings of Greenberg in the beginning of the 1930ies. Also this Greenberg’s work enriches considerably the picture of the artist’s earlier creation, from which have preserved only a few examples.