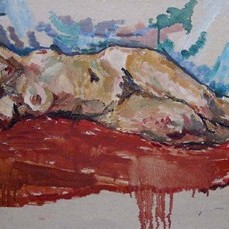 For Henn Roode "Pallas" was most probably the only possible place to receive art education. Even though the school had changed its name by the year 1944, it was the place where Roode started his studies. Together with Ülo Sooster, Valdur Ohakas and others, also he belonged to a new and powerful generation of artists, whose natural development was cut by arrestings in November of 1949. But several years in prison camp could not finish Roode's (other others') wish to deal with arts. "Different powers come and go, but art remains," liked to say Valdur Ohakas.
Nude paintings are a quite rarely exposed genre in Roode's creation. Art history knows mainly the artist's laconic nudes, where the colours have rather been used sparingly than in a squandering way. The current work is totally different: at every new viewing can be detected a new colour or shade. It is remarkable, how the artist was simultaneously able to depict a human body, lying in the studio and travel in his own colour imaginations.