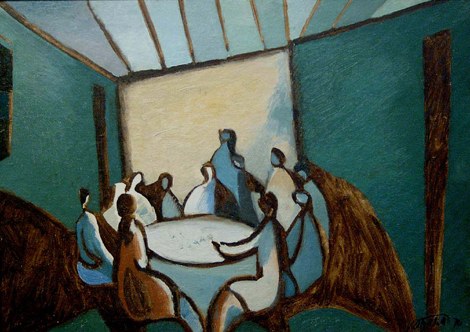 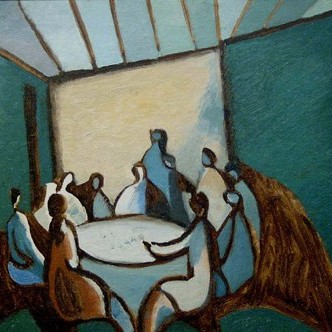 Evaluation of the creative heritage of Valdur Ohakas has been surrounded by contradictions and his importance in the formation story of the Estonian modern art and in the renewal of painting has started to be emphasized more in the last decade. As the member of the so-called "Tartu circle of friends" and obviously the best friend and congenial person of Ülo Sooster, Ohakas was since the end of the 1950ies one of the decisive changers of the general expression of the Estonian art.
The studies of Ohakas in the previous "Pallas" had hardly come to an end, when he was arrested and sent to the exile for the period of seven years. After his return he quickly became one of the key figures in the "Grouping" of no concrete frames, having been formed in Tartu by the previous co-students, the joint exhibition of which in the year 1960 is regarded an important landmark of the history of the modern Estonian art. The creation of Ohakas won gradually more attention and because of his form-renewing experiments and unexpected turns he could have been compared with his former teacher Elmar Kits. So Oks melted into his works abstractionism, cubism, but also the experience of surrealism and fovism. Instead of the true-to-life reflection of the reality he had been interested for already a long time much more in testing of colours and forms, giving a trial to their relations and trying to re-position them.
On the work by Ohakas at the table suddenly get together colours that would earlier have been total strangers to each other. The laws of physics also lose their validity in a deformed room and everything "ordinary" is proclaimed to be an eternal taboo. Instead of an idyllic café environment we see persons, chatting in a modern form of a language, instead of coffee cups and cream cakes we see a silent dialogue. And the longer we look at the threatening black eye of a window in the left edge of the work that seems to be checking and following, the more it starts to feel that the company at his table is not just a company. The more it feels that they have already met somewhere. For example in Tartu....