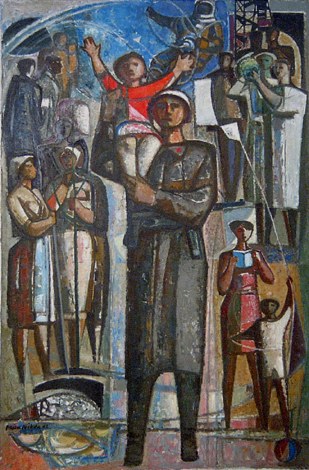 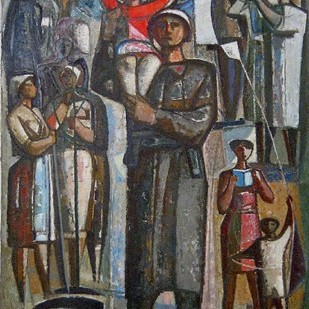 Lepo Mikko belongs into the generation, whose works found great recognition both before and after the World War II, but whose creation is in spite of this in continuous changing, undergoing permanent variations. Differently from the Endel Kõks - style of flirting with the pop art or Elmar Kits - style abstractionism, the third member of "The Tartu Triplet" - Mikko - started cubistic stylization in the 1970ies. From his creation are the best known and reproduced just the monumental works of that period, in which he handles the theme of "man and the outer space" that was immensely popular at that time.
The current work is valuable both from the perspectives of art history and history itself. Work, being of the renewed form, but still executed technically perfectly, shows the artist's excellent sense of composition and the skill to conduct every smallest moment to the point of its hearing. A red star on the soldier's uniform and a machine gun on his chest refer to the following of certain obligatory canons, being so the evidence of rules that designed the general view of the Estonian art for decades. Mikko's amazing ability to talk about the unavoidable outer space topic by using an innovative form language puts the work into one line with the legendary works "Man and the outer space" and "The time machine". For these mentioned works he won the prize of the Soviet Estonia, but the same works enable to talk about Mikko also now as of one of the most outstanding artists of the 1960ies.