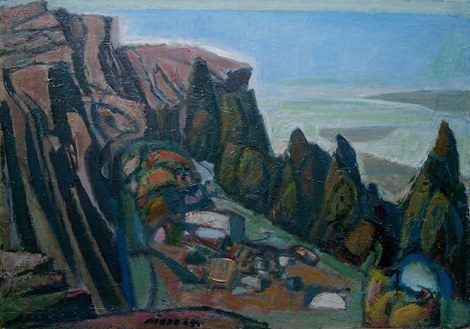 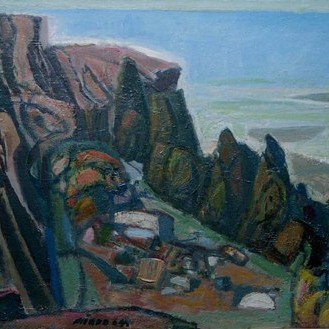 Mikko of the 1950ies is remembered by his students as a teacher, who was not afraid to give up standards that were enacted by forces outside art circles and he continued to forward everything that he had learnt under the supervision of Nikolai Triik. Placing of three Mikko's works side-by-side shows us well that the artist was never quite satisfied with what had been already achieved. From the extremely elegant and fragile depiction of the kiss of the land and sea from the beginning of the 1950ies Mikko moves in the beginning of the 1960ies towards a vigorous, but a very sophisticated colour handling that covers cubist-style form experiments. Exactly at this period Mikko makes several views of Saaremaa, where according to the opinions of art historians is expressed his "sharpened sense of form". In the creation of Mikko, having emerged together with Elmar Kits and Endel Kõks at the end of 1930ies as the member of the "golden triplet", can be detected at the end of 1940ies certain tiredness and stolidity that in mid-1950ies was replaced by a new era. His canvas "started to glow in an optimistic manner" and suddenly the landscape was full of colours.
Ten years later we see a totally different Lepo Mikko, who still is Lepo Mikko - an artist with a perfect sense of form and colour. His angular landscapes of that period have been compared with Kristjan Raud's archaic style (let us remember - Raud was for the Pallas students a great model). Line handling of the artist is in its turn compared with joining places of stained glass, colour handling even with that of Konrad Mägi. Comparison, which all are appropriate in case of just one artist. In case of Lepo Mikko.