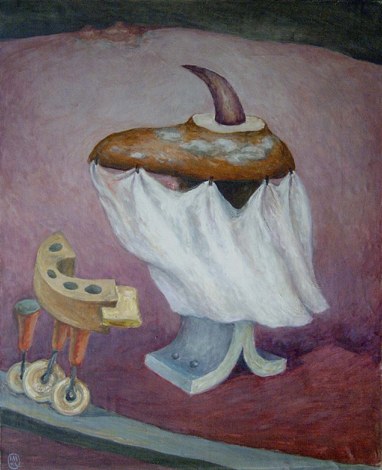 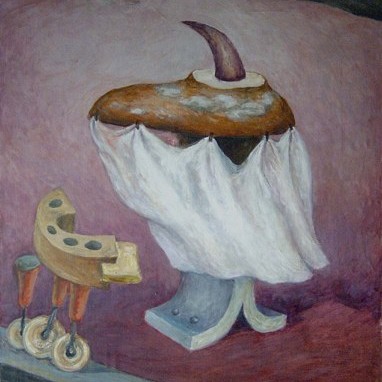 In case of Ilmar Malin it is noted with a reason that "first of all he is one of the few, but still one of the most consistent users of the surrealistic creation method in the Estonian art". In the course of years he undergone a number of significant changes, but the main part of the Malin creation is still regarded the continuation of the principles of one of the most important artistic styles of the 20. century - surrealism - in his works. After returning from the imprisonment in Siberia, Malin entered the Art Institute, where he got rid of the acquired social realistic form language only in the beginning of the 1960ies. Detaching of Malin from realism, that seemed boring to him, became more rapid and soon he started to experiment with surrealistic methods.
"With the wheels" represents a rare example of one of the most significant branches of art history in the Estonian art, being simultaneously the evidence of the existence of surrealism that had such a "dangerous" influence in the opinion of the bodies on power and also a highly characteristic example of the creation of Ilmar Malin. The mentioned work is loaded with figures, having been born in the course of spontaneous drawing that the author has further developed into a large-format oil painting. In this manner the artist executes a specific celebration of random sketches, translating signals, originating directly from the subconcious level into the language of art. Into the language, that in the opinion of Malin never becomes completely ready.
"With the wheels" was exhibited in 1984 in Ilmar Malin's personal exhibition "Things.Birds.Landscapes".