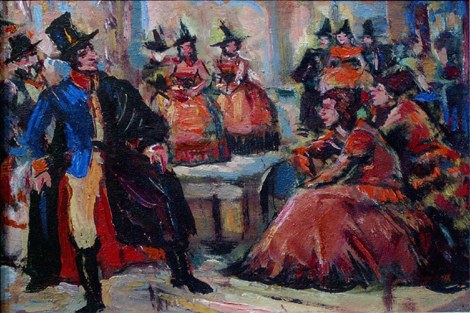 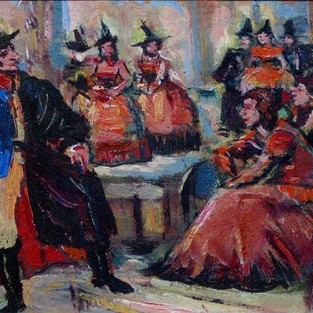 Fate of Johannes Greenberg as an artist is one of the most outstanding but also one of the most tragic ones. His "story" includes crestomatic stories, having become unseparable parts of the Estonian art history, but also accusations for not participating in the Soviet artistic life.
Johannes Greenberg is one of the few Estonians, who received his basic education in Munich. In the beginning of the century he visited for a short period the studio school of Ants Laikmaa, but afterwards headed for Germany. There Greenberg also participated in a bigger exhibition for the first time. After a seven-year stay in Moscow he arrived in Estonia in 1920, still continuing longer trips abroad. Long and permanent collection of modern paintings and being present at the birthplaces of new trends enabled Greenberg to become for approximately 30 years one of the most important figures of Estonia. After experimenting with different styles, he left in spring of 1936 for a longer trip to Europe, visiting also Spain for a couple of months. Obviously things experienced and seen there brought about an important and visible change in the artist's creative work. The following is already known by art history as "Intensive flourishing period of Greenberg's creation" that lasted up to around the year 1944. After the war Greenberg seemed to be doing well - in the year 1947 his lecturer's career was crowned with the professor's title and his painting style influenced to a very great extent also painters, acting outside the school walls. But soon all of it was followed by an unexpected turn, his casting out from the Artists' Association, the studio and Greenberg's tragic death in the year 1951.
Works, painted during the period 1936-1944 are considered to be belonging into the gold fund of the Estonian art history. His works of the mentioned period are "continuously in the centre of attention of fellow artists, critics and art viewers, the diversity of his painting solutions creates admiration", write the researchers of Greenberg's creation. Still, in spite of this Greenberg's works have reached wider public remarkably rarely and even smaller is the number of works, being created in his best creative period. Appearing of two works on the favourite topic (theatre and actors) of the artist, who is extremely highly valued among professionals is an event in itself. "Actors" and "A scene at theatre" include everything that those, valuing Greenberg could expect: brilliant painting technique and at the same time improvisations, the recognized Greenberg - style use of colour and dance traces of the brush. Furthermore: we are shown the playful character of theatre, actors, undergoing constant role changings, who have dropped masks for a moment - noble and romantic, enigmatic and mystical. Works, belonging to the best part of Greenberg's creation, prove the author's excellent ability to use painting techniques and of his ability to handle it freely and playfully.
"A scene at theatre" is reproduced in monography "Johannes Greenberg" (author: Hilja Läti). Repro no 71.