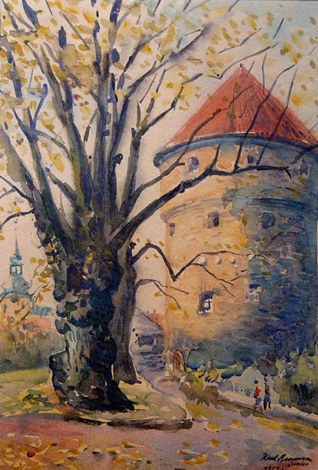 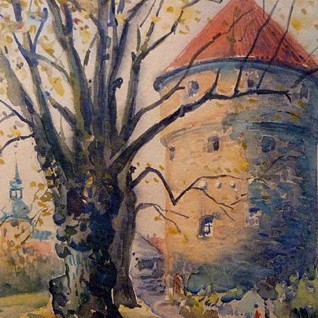 Karl Burman, coming from a family of artists, most probably had no specific need for the professional education. At the supervision of his father, Karl Burman senior and uncle Paul Burman, the young artist received such knowledge that was difficult to be exceeded by those, having studied at schools. After the World War II he quickly became a recognized architect and Water-colour painter and such unusual combination is also reflected by the present work.
The city scape has been an extremely popular genre and stepping out has been made complicated. But the work of Karl Burman junior has been able to detach from the postcard-style angle of approach and has collected the author's both experiences. The choice of motifs originates from the archtect, from the Water-colour painter comes the brilliant technique and melting of the colours into an original outcome. Having closed one eye, the artist inspects carefully the architectural forms of Kiek in de Kök and afterwards lets the brush fly.