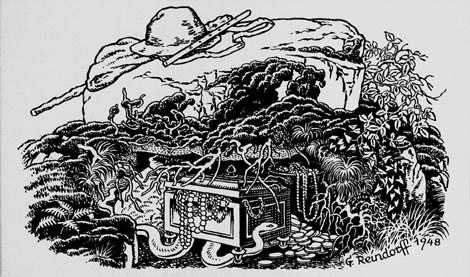 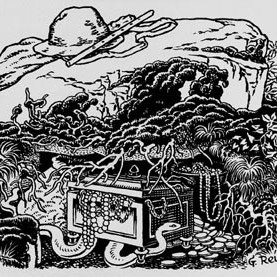 Günther Reindorff is an artist, who has drawn himself into the memory of almost everybody and so is a part of our collective cultural conciousness. He is one of the few artists, whose works are probably better known than his name. Reindorff has won such a place certainly thanks to his legendary illustrations of the Estonian fairy-tales, no equals to which can be found in the local art. To Reindorff, who was known as a superb drawer, the mysticism and fantastic places and situations of fairy-tales offered a wonderful possibility to play with different forms of drawing. So Reindorff has simultaneously tried to forward the gloominess of the cavern and dark rock peak, but also wriggling of the Snake King and mysticism of a deserted hat.
In spite of belonging of the fairy-tale illustrations into the personal memory bank of everyone there is a rare chance to see them as original drawings. Illustrations that are extremeley detailed and well-elaborated are regarded to belong to the classics of the Estonian art history.
The work is reproduced in the initial issue of the Ancient tales of Estonians (Tallinn, 1951) and in the Russian issue of the same book (Tallinn, 1969).