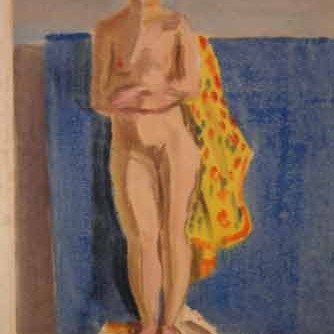 Karl Pärsimägi is one of the highly talented young artists - Aarne Miikmaa, Hando Mugasto, Paul Liivak and Edmond Arnold Blumenfeldt - who unfortunately passed away at a young age. After studies at Konrad Mägi and Ado Vabbe in Pallas Pärsimägi lived at his relatives in the country, but similarly to other Pallas students his heart was in Paris. So in 1937 he put on his bowler hat and left the train only in the Paris station. Living on odd jobs and donations, the artist seemingly regarded freedom without the limitations of institutional frames to be of the highest value. Pärsimägi was arrested during the French occupation and he was soon executed at a concentration camp.
Despite the short life Pärsimägi was able to become one of the most acknowledged artists, who became famous directly before the World War II. His nude, being so characteristic to his creation of the mid-1930ies is recognizably in Pärsimägi style: instead of the exact depicting of the figure the person melts softly into the surrounding colour that has been painted in large surfaces. Here the artist concentrates on inquiring of the co-effect of colours on a human being, exploring a number of new possibilities.
The work is shown in the Karl Pärsimägi exhibition catalogue (no 8, page 45) (Tartu State Art Museum, 1966). This was the last bigger exhibition (in the Tartu Art Museum in the year 1966), that was dedicated to Karl Pärsimägi