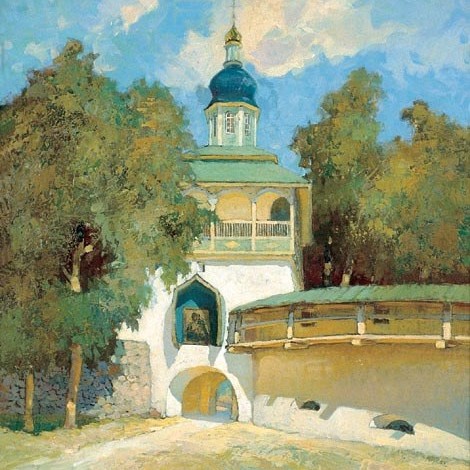 It seems that Roman Nyman accepted already in his youth a firm decision to start working as a theatrical artist. At the age of 19 he went to St.Petersburg, where he studied decorative painting and theatrical decoration, later was for years head of the decoration studio of the State Art Vocational School and artist of the Estonia and the Drama theatres. Because of poor health Nyman still had to give up theatrical work and he took up painting, but it seems that the skill to stage a room accompanied Nyman also in this sphere.
Works on the themes of the Petseri monastery are remarkable in the creation of Nyman. They differ from the paintings of the 1940ies, when the artist preferred work- and farming-related themes due to the colour handling and choice of motifs. Monastery views have been widely exposed both at modern and past time exhibitions. In these works is also restored the so-called Italian period that is highly valued in the Nyman creation. Similar are the sense of room and light colours. Differently from the conventional ways of room depicting by the means of lines and volumes Nyman uses in these works colours and their shades, placing the monastery into a spiritual room of light that is separated from the rest of the world. Build-up of the works proves the artist's deep absorption in the depicted and depicting. Undoubtedly we are dealing with examples of extraordinary pure style from the creation of the probably one of the most brilliant room painters of the Estonian art history.
The Petseri monastery has been exposed at a selective exposition in the Tallinna Kunstihoone in the year 1945, at a personal exhibition in the Tallinna Kunstihoone in the year 1948, at a personal exhibition in Kadriorg in the year 2000, where together with this work was exposed another auction work - Petseri. Having most probably been painted as the motif repetition of The Petseri monastery at the same period, the painting emphasizes the artist's special dedication just to one theme, as if he would strive to reach the perfection of the picturesque impression