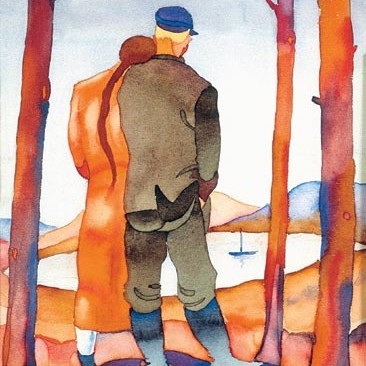 Natalie Mei - the youngest of three sisters - is first of all regarded important because of her theatre decorations and especially because of her costume designs, with which she laid the foundation to emerging of the costume design as a separate art line in Estonia. Emphasized are her good drawing and water-colour skills that enabled the sketches to become independent pieces of art.
A couple from the back brings out in addition to the mentioned skills also a trait that is regarded unseparable with the person and creation of Mei - a subtle sense of humour. A laconic choice of colours leaves thanks to melting into each other, mixing with water and strictly directed dispersion an impression as if on the palette takes place a random sliding, as if there are not only a couple of colours, but at least a couple of dozens of them. Mei can depict love in such a simple, even reduced manner that bond between two persons becomes closer (and more real) than a direct saying could ever accomplish.
The work was exposed at the 100.anniversary exhibition of Natalie Mei in the Adamson-Eric Museum in the year 2000.