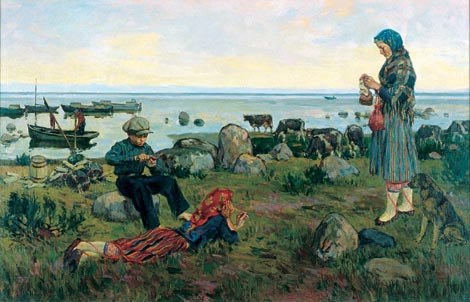 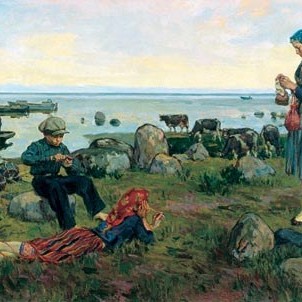 Valerian Loik was the professor in the Estonian Art Institute almost as long as he was the student in Pallas. He graduated from the mentioned educational establishment after 11 years of studies in 1935 as the student of Ado Vabbe, working after that until the beginning of the war only as an accountant. After the war he started to work as an art teacher, being at the same time a fruitful painter, working in different styles.
Loik often started with paintings, with the motifs of which he continued working, leaving unchanged both the composition and the choice of colours. This work precedes Loik's obviously the best known work The Kihnu shepherds (Kihnu karjused) (1956), which has been bought by the Tartu Art Museum, but differences between the two works are only in details. The Kihnu vision is on one hand a superb example of the brilliant command of the classical painting technique, on the other hand the work is the representative of this side of the realistic art that can be a co-resider, part of the reality without being too trueful or - on the contrary - too sweet. So the Loik painting can be taken upon requirement also as an etnographical document.