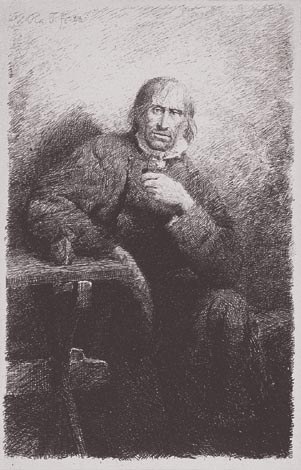 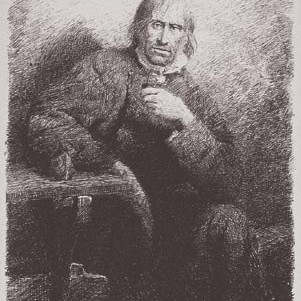 At the age of 32 Oskar Hoffmann had had private studies at masters in Estonia and Paris and in the Düsseldorf Art Academy, where he became one of the most well-known and outstanding member of the so-called Düsseldorf school. Hoffmann has drawn and painted himself into the Estonian art history mainly by depicting peasants that in the anxious context of the middle of the 19th century had an unexpectedly warm impact. Etching An Estonian reflects despite of the youth of the artist his already developed creative manner, one key word of which, depicting of the picturesque light-dark also carries in the mentioned work a symbolistic value - the expressive face of the Estonian is strongly emphasized on the light background.
The work is one of the seven well-known etchings of O.Hoffmann, depicted in the exhibition catalogue, having been held in 1954 in the State Art Museum (no 105), but also in the detailed lexicon of Russian engravings of the XVI-XIX cent. (St. Petersburg 1895, I, page 242, no.5). The work was reproduced in the 1883 year issue of Becтник Изящных Искусств.