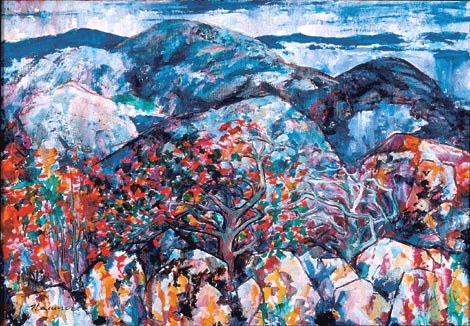 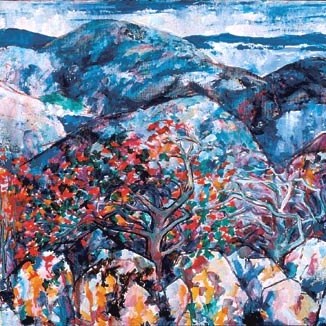 After leaving the homeland Haamer lived in Sweden, first in Gothenburg, the last 19 years in a small city Kungläv that is located in the close neighbourhood of Gothenburg, near the sea. The local landscape must have been unfamiliar for Haamer. As a person, having been born in Saaremaa and having later lived in Tartu and Tallinn he had rather got used to junipers, lowlands, shoals or wide sea panoramas than with the mountainous landscape of the south-western Sweden. Travel impressions, having been received in the end of the 1950s - in the beginning of the 1960s in Spain and Portugal also emphasized the necessity to paint a strange landscape into a familiar one. So were created several landscapes that were very unfamiliar in the Estonian art that surprise with different motifs and colours: ordinary co-influence of green-brown-yellow has stepped back in front of the duet of dark blue-white.