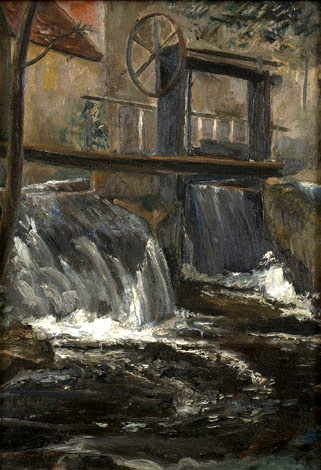 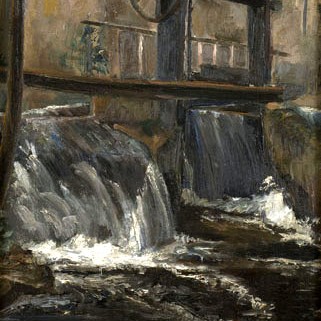 Art deco arrived in Estonia quite quickly. Several Estonians, among who was also Adamson-Eric, visited the Parisian exhibition in 1925. The new style obviously inspired him. While walking around at the exhibition, Adamson-Eric spotted a group of painters, who inspired him to such extent that he commenced his studies at Vassili Shukhayev. The traits of his tutorage can also be seen in the present work that was accomplished in Paris. No, these were not geometrism, lines and angles, but these were other directions of the bountiful art deco that inspired him while painting “Vesivärav” (“Lock-gate”). Adamson-Eric arrived at geometrism later, in his applied art and drawings, from the best part of which also two compositions are presented at the current auction. In “Vesivärav” the artist was overcome by stressed plasticity, if we quote the words of Mai Levin. Before the participation in several exhibitions in Estonia, Adamson-Eric also exposed this painting in Paris, where the work most probably found a fertile ground: art deco was undoubtedly a fashionable term.