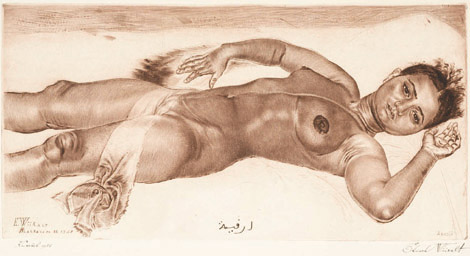 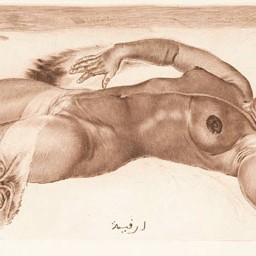 “Arkeia” is one of the best-known sheets in Wiiralt’s creation that enchants us with its abundance of nuances and its mood. In 1938 Wiiralt is heading for Morocco in order to collect new creational impulses. And really – on the trip are accomplished several landscapes and depictions of the nature. Wiiralt’s creation undergoes a new coming. But “Arkeia” as Wiiralt’s source of inspiration also depicts the local inhabitants, their exotic looks and slightly childish trust towards strangers. The model is looking boldly at us, her hand being slightly hooked. By toying with different possibilities of the line, Wiiralt is able to render both forms and changes of light and shadow on the body. A new dimension is being introduced by the depiction of a transparent piece of cloth, which is used by Wiiralt for the light cover-up of the lady.